Rosacea is usually thought of as just a skin disease. It is inflammatory in nature and causes red, irritated skin along the forehead, cheeks, nose, and chin. In many cases, people with rosacea develop pimples and thickening skin.

Ocular rosacea is a subtype of rosacea and causes red, itching and irritated eyes. It may show up alone, or in conjunction with the more classic signs of rosacea.

Rosacea outbreaks can be triggered by any one of a number of factors including:

Genetics, sun exposure, bacteria, and Demodex mites are all known to be potential causes of rosacea. Most people, however, do not know what the source of their disease is – only that they do not like the results.

What follows is a deeper dive into rosacea, ocular rosacea and the solutions that may offer some relief of the symptoms. Rosacea is defined as:

A chronic skin disease that causes persistent redness over the areas of the face and nose that normally blush: mainly the forehead, cheeks, chin, and the lower half of the nose. The tiny blood vessels in these areas enlarge (dilate) and become more visible through the skin, appearing as tiny red lines (telangiectasias). Pimples that look like teenage acne can develop. Rosacea occurs most often between the ages of 30 and 60, especially in people with fair skin. It affects both sexes. Although it tends to occur in women more often than in men, it is often worse in men. In most people the symptoms come and go, although it tends to worsen with time.

Rosacea is usually diagnosed based on the typical red or flushed facial skin appearance and symptoms of easy facial blushing and flushing. Rosacea is largely underdiagnosed, and most people with rosacea do not know they have the skin condition. Many people may not associate their intermittent flushing symptoms with a medical condition. The facial redness in rosacea may be transient and come and go very quickly… (in) unusual cases, a skin biopsy may be required to help confirm the diagnosis of rosacea. Occasionally, a noninvasive test called a skin scraping may be performed by the dermatologist in the office to help exclude a skin mite infestation by Demodex, which can look just like rosacea (and may be a triggering factor). A skin culture can help exclude other causes of facial skin bumps like staph infections or herpes infections. Blood tests are not generally required but may be used to help exclude less common causes of facial blushing and flushing, including systemic lupus, other autoimmune conditions, and dermatomyositis.

There is a connection between rosacea and other autoimmune and inflammatory diseases such as diabetes and cardiovascular disease. However the exact relationship is still under investigation.

Rosacea is not contagious, and while it does cause the nose to become bulbous and the skin to thicken, appearing more commonly in people of Irish and Scottish heritage, despite what people think it is not directly linked to alcohol consumption. However alcohol can aggravate the condition. The skin thickening and permanent swelling is one of the worst effects of rosacea. It does not happen to everyone however, but all rosacea sufferers do get redness of the face. The redness is made worse when people become flushed. Flushing occurs when people drink, are embarrassed, or overheated. Blood vessels of the face can dilate permanently, making them visible through the skin. The resulting patterns of tiny red lines are called telangiectases. When flushing occurs repeatedly it can cause inflammation, which triggers papules that look like acne to appear on the face. For this reason rosacea is frequently called acne rosacea.

While you cannot prevent rosacea, if you have been diagnosed you can avoid the factors that trigger it such as smoking, irritants, sunburn and spicy foods.

What Is Ocular Rosacea?

If you have ocular rosacea chances are that you will also have rosacea visible on your face. The opposite is less likely. With only a little more than half of rosacea patients suffering symptoms in their lifetime of ocular rosacea, it is much less well recognized and frequently mistaken for allergies, blepharitis, or conjunctivitis. Symptoms include:

If left untreated, subtype 4 ocular rosacea can become very serious. (Source). In most patients, there are accompanying complications, such as meibomian gland dysfunction which occurs when the meibomian glands on the edge of the eyelid become plugged. Their function is to secrete a lipid that keeps the eyes from drying out, so dysfunction can trigger dry eye syndrome, a stye, or a chalazion. Without treatment, corneal damage can occur that leads to vision issues including those caused by neovascularization, which is due to extra blood vessels appearing in the eye.

The Link Between Rosacea and Demodex Mites It is commonly understood that there is a significant connection between demodex mite populations and rosacea, as well as many other inflammatory and immune disorders. The National Rosacea Society reports the following:

Demodex folliculorum true connection to rosacea may be linked to a distinct bacterium associated with the mites, called Bacillus oleronius. Dr. Kevin Kavanagh and colleagues at the National University of Ireland-Maynooth found that B. oleronius stimulated an inflammatory response in 79 percent of study patients with subtype 2 (papulopustular) rosacea.

The investigators also noted that the bacteria’s potential role is supported by the fact that effective treatment for rosacea includes antibiotics that destroy B. oleronius, while antibiotics that are not harmful to these bacteria generally are not effective in the management of rosacea.

Staphylococcus epidermidis, another type of bacteria that normally exists on the skin, also may play a role in the development of rosacea. In a study of 15 rosacea patients, Dr. Margot Whitfeld and colleagues from St. Vincent’s Hospital, Sydney, the Monash Medical Center, Melbourne, and the Royal Adelaide Hospital… found a pure growth of S. epidermidis in the eyelid margins of four patients with rosacea.

Demodex are also implicated in cases of dry eye syndrome, styes and chalazion and can trigger blepharitis. The mites are microscopic ectoparasites that live on and around human hair follicles and consume skin cells and sebum, the oil produced by the sebaceous glands. There are two species, Demodex folliculorum and D. brevis, which differ in size and shape. With 4 pairs of legs in their fully mature forms these tiny arachnids have a fairly short life-cycle (less than 3 weeks) and can be found on human beings in every corner of the world. It is theorized that people with rosacea actually have an allergy to the mites. Whether this is true, or not, there is evidence that those suffering from ocular and other forms of rosacea, have a higher demodex load than people who are not. And one study shared inside a Rosacea Support Group indicates that demodex may prolong and intensify ocular rosacea.

Currently, there is no known cure for rosacea or its subtypes. However, there are treatments for the symptoms. These treatments may include placing warm compresses on your eyes several times a day to unblock the meibomian glands and provide some relief to your dry and itchy eyes. Some doctors will recommend that you clean your eyelid with baby shampoo, while others will point out that baby shampoo was not actually made for eyelid treatment and Cliradex is much more effective and less potentially irritating. If the case is severe enough it is not out of the question to have a medication prescribed that includes antibiotics or even steroids. Additionally, your doctor may want to perform a medical treatment that involves a procedure to unblock your glands. This is done with tiny probes. For skin flare-ups there are oral and topical medications that can help to treat visible symptoms. Some combination of treatments may be recommended, depending on the case and complications. Regardless of the extent and symptoms of ocular or skin rosacea, most doctors will agree that the most effective treatments are avoiding triggers. This includes practicing hygiene that reduces bacteria, which is especially true when it comes to impacts of rosacea on the eyes. Regular eyelid cleansing will not only help to reduce signs of ocular rosacea, but will also help to remove the bacteria from the eye area that can trigger flare-ups. Inflammation and eye irritation can be greatly reduced by the gentle, yet effective, vegan and preservative free formula found in Cliradex Light Foam.

Cliradex has been designed specifically for use near the sensitive eye area. It is gentle enough for everyday use and can be used on the skin of the face, as well as the eyes. Cliradex is the only commercially available product that isolates 4-Terpineol, the compound found in tea tree oil with demonstrated capacity for eliminating Demodex mites.

Pure tea tree oil cannot be used topically to eliminate the mites, even through it works against them, because it is highly irritating to the eye and the skin.  However, it is the one compound that is known to be effective, so it is best to use the Cliradex formulation to treat your ocular rosacea. Rosacea: How are Demodex Mites an Underlying Factor? 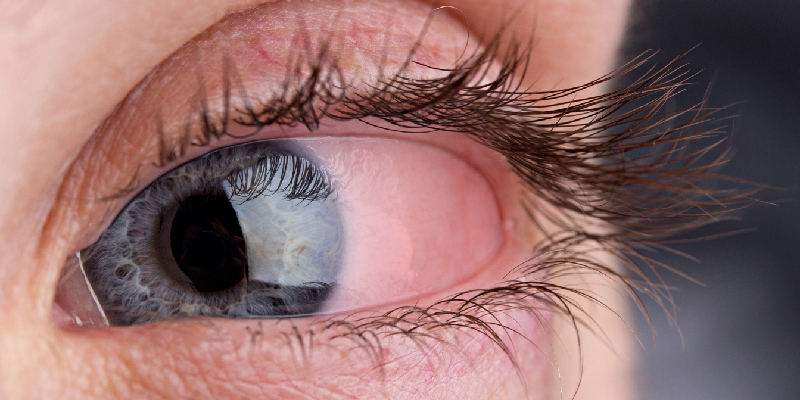