Most people are unaware that hundreds of microscopic creatures are currently living on their bodies.

Demodex is a kind of tiny mite that lives in or around the hair follicles of mammals. There are around 65 known types of Demodex, but only two inhabit human beings. Demodex folliculorum and Demodex brevis can both be found on humans.

These tiny creatures are microscopic and invisible to the human eye. The average Demodex folliculorum mite measures 0.3 to 0.4 mm in length. While Demodex brevis are half that size, at 0.15 to 0.2 mm.

The mites are incredibly common. Some studies show that by age seventy, nearly 100% of people have populations of mites living in their eyelashes. Because they are invisible to the human eye, and rarely cause symptoms, most people are unaware that they are carrying Demodex.

For the most part, the mite is completely harmless. It will inhabit the eyelashes and hair follicles of their host without creating any kind of harm or irritation. However, large populations of Demodex can produce a variety of uncomfortable symptoms. This includes itchy and scaly skin, redness, a burning sensation, and rough sandpaper-like skin.

If the infestation continues for long periods of time, the mites can begin to affect eyelash health. Eyelashes may curl toward one another, become thin and brittle, or begin to lose their color.

Occasionally, large populations of Demodex can cause inflammatory damage to the structure of the eyelash, resulting in loss of lashes. In addition, Demodex can lead to eyelid inflammation.

A variety of diseases are associated with Demodex infestations. Patients suffering from acne rosacea, seborrheic dermatitis, and other inflammatory skin conditions have an increased likelihood of hosting substantial Demodex populations. Those with diabetes weakened immune systems, and allergies are also at greater risk for a Demodex infestation. The likelihood of encountering Demodex increases as people age.

Demodex also has strong links to rosacea. Recent research suggests that the skin condition may, in fact, be caused by the presence of Demodex mites.

Demodex occurs naturally in human skin and on human hair follicles. However, the mites can be spread through contact with other people that are carriers for Demodex.

If you are experiencing these symptoms and believe Demodex may be the cause, schedule a doctor appointment for a diagnosis. The mites are not visible to the naked eye. So a doctor will need to take a sample of follicular tissues and oils from your face. He/she will run a skin biopsy in order to determine if Demodex is present.

If a large number of mites are causing unpleasant symptoms, there are a variety of options available to eliminate or reduce the population of mites.

First, you can look at topical solutions. Home treatments like over the counter creams are available. Gels and face wash with benzyl benzoate, salicylic acid, selenium sulfide, and sulfur can all be used to treat Demodex infestations.

A natural and efficient alternative is 4-terpineol, the main component found in Cliradex eyelid cleansers. It is an alternative to tea tree oil, often too harsh on sensitive skins. It is also more efficient than baby shampoo.

If the population of Demodex you are hosting is particularly severe, there are also medical treatments available.

Prescription ointments can be applied to the eyelashes. It will trap Demodex folliculorum and prevent them from laying eggs in other hair follicles. Medical professionals can prescribe crotamiton, ivermectin, metronidazole, and permethrin to treat Demodex infestations.

In all likelihood, you probably have Demodex living in your eyelashes and follicles.

But playing host to microscopic mites isn’t as scary as it sounds. As long as the population of Demodex mites living on you remains manageable, you should never notice these tiny creatures. If you aren’t experiencing any discomfort, live and let live. However, if the population grows and begins to create uncomfortable symptoms, contact your physician to discuss potential options for treatment. 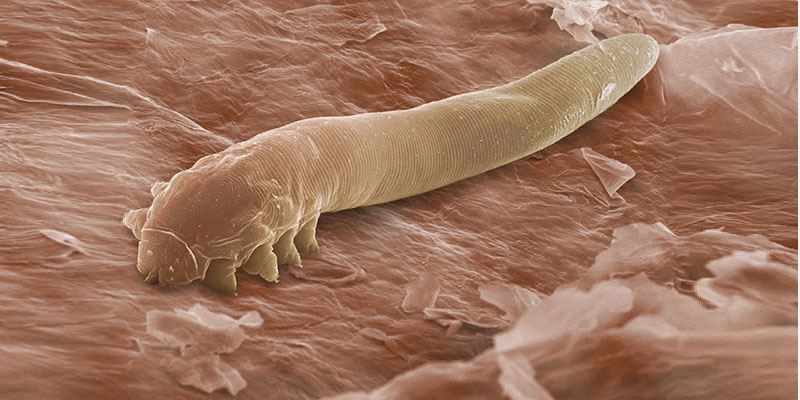